The Tick Risk: 5 Diseases Your Pet Can Catch from Ticks

Ticks aren’t only icky, they can carry diseases that are dangerous to you and your pet. Although you can take preventive measures, the truth is, pet owners cannot 100% prevent tick bites. Diseases caused by microorganisms passed through tick bites, such as Lyme, Rocky Mountain spotted fever, ehrlichiosis, anaplasmosis, and hepatozoonosis, can affect any dog or cat, whether they stay inside or only go into the backyard. Ticks have been reported in nearly every U.S. state, although they are more common in the eastern U.S., and can live in any grassy area, making them impossible for the most well-intentioned owner to avoid. Following are five diseases ticks can transmit to your furry friend.

The most diagnosed and well-known tick-transmitted disease, Lyme disease is transmitted by the deer tick, and has been diagnosed in many U.S. states and southern Canada. Lyme disease signs include fever, joint swelling, lameness, lethargy, and depression and can progress to potentially fatal kidney failure. Fortunately, the disease can easily be diagnosed with a blood test and treated with a long course of antibiotics, and there is a vaccine available. So far in 2019, nearly 5,000 dogs in Ohio have tested positive for Lyme disease, so ask our team if the Lyme vaccine would be a good choice for your dog.

Rocky Mountain spotted fever, another well-known tick-borne disease that affects both animals and humans, is carried by several tick species and found all over the U.S., despite its regional name. General signs include fever, lack of appetite, and joint pain. Neurologic signs, such as wobbliness or weakness, may also be seen. Although no specific test exists, certain bloodwork abnormalities may suggest infection. Treatment is a course of antibiotics and supportive care.

Ehrlichiosis has been defined as a disease only relatively recently, but is prevalent worldwide and carried by several species of ticks. Signs are similar to those of other tick-borne diseases, such as fever, lack of appetite, lethargy, and bloodwork abnormalities. Often owners see a bloody nose or bruising as the first disease sign. Symptoms start one to three weeks after infection, and dogs who are promptly treated can fully recover. Ehrlichosis does have a chronic form, and is harder for pets who aren’t diagnosed until later in the disease progression to overcome. Diagnosis can be made through a blood test, and treatment is a course of antibiotics and supportive care.

Carried only by the black legged tick, anaplasmosis is linked to  phagocytophilum and platys, two specific U.S. bacteria. Anaplasmosis signs aren’t as extreme as other tick-borne diseases, but can include bleeding abnormalities. Diagnosis can be made through a blood test, and treatment is an antibiotics course. 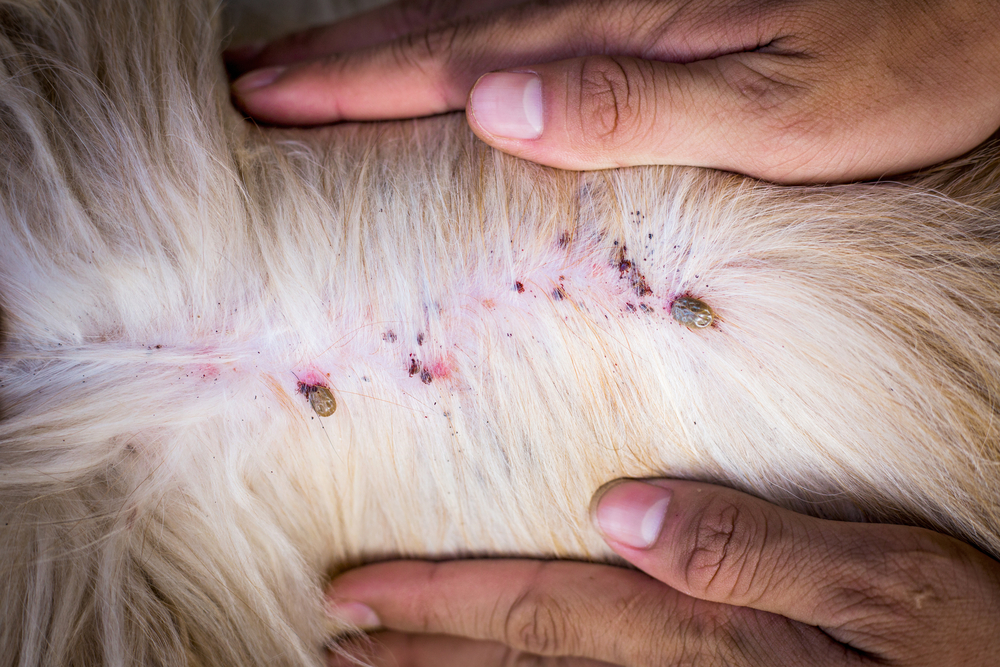 Spread by the Gulf Coast tick in the southern and warm coastal U.S. areas, American canine hepatozoonosis is the most serious on this list of tick-borne diseases. Unlike other tick-borne diseases where the microorganism is transmitted via a tick’s saliva, hepatozoonosis is contracted when a pet ingests an infected tick, either through self-grooming or hunting. The disease cannot be transmitted to people, but can be fatal for the infected pet. Signs include extreme pain, unwillingness to stand, muscle wasting, anemia, and fever. Unfortunately, no cure exists, and infection is considered a lifelong condition. For animals who receive early treatment and have a low parasite load, remission is possible, but for those who have a long-term infection, and/or a high parasite load, relief may not be possible, and may be fatal.

Arming yourself with knowledge about tick-borne diseases and their signs is important, because ticks cannot be completely avoided. Therefore, always check your pet regularly for ticks if you live in or visit a tick-infested area, both to protect your pet and to avoid bringing ticks into your home. The less time a tick is embedded in your pet, the less time it has to transmit a debilitating disease. Flea- and tick-prevention products are available—contact our hospital to discuss the right tick preventives for your pet.

About the Author: Animal Hospital of Pataskala